The Eagle Tribune By Julie Huss 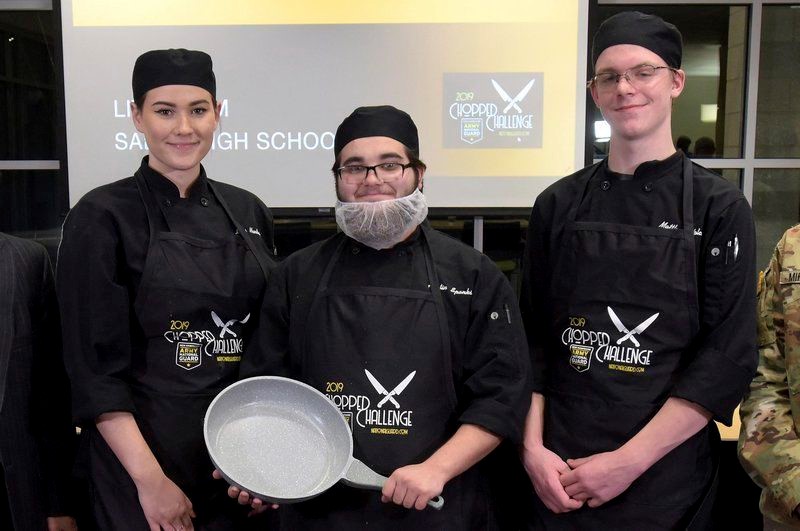 SALEM, N.H. — It was meal preparation with a twist of time — and some military food choices tossed in.

And for students chefs recently taking part in a fast-paced kitchen battle, it was also about teamwork and creating a perfect plate of food.

Six New Hampshire high schools and their Career and Technical Education programs participated Wednesday afternoon in a cooking battle, the inaugural 2019 MRE Chopped Challenge, based on the style of the popular Chopped or Iron Chef America television programs and pitting teams against each other in a fast-paced culinary cook-off.

Pinkerton Academy, Salem, Alvirne, Milford, Nashua and the Manchester School of Technology all sent teams to the challenge.

The friendly competition held at Salem High School drew teams of three culinary students each, plus additional marketing and video production students, all participating in contests in the kitchen and also with video challenges and marketing projects.

As part of the kitchen battle, students were required to incorporate MREs into their menus.

An MRE is a prepackaged meal that comes with a flameless ration heater so those serving in the military can have a quick, hot meal without using fire for preparation. Each MRE typically contains up to 2,000 calories worth of food, including an entree, dessert, snacks and beverage.

None of the students competing knew what was inside the MRE packets until competition began.

The Salem CTE center was filled with students, camera operators, hosts, and National Guardsmen, all on hand to make the event as real as possible to an actual broadcast, streamed live on the school's social media sites.

"This competition will not only give our talented CTE students a chance to show off their skills across several programs, but also put them in contact with the dedicated men and women serving in the New Hampshire National Guard," state Education Commissioner Frank Edelblut said.

After gathering for photos and instructions, student chefs then scurried to their work tables to begin the competition, opening their designated MRE packets and figuring out a menu using compacted ingredients such as chicken, tortillas, sauces, and candy — all to be completed and ready to taste in about an hour.

Each team also had a National Guard member assigned to be a "runner" to help with the kitchen work.

Schools were given 12 MREs for practice purposes the week prior to the competition. National Guard representatives also unveiled a secret ingredient that needed to be used in meals — plantains.

New Hampshire Adjutant Gen. David Mikolaities said he is a "connoisseur" of MREs dating back to the 1980s and had tasted a big variety of tastes all crafted for the soldier on the go.

"I'm confident these students will have the culinary genius and imagination to raise the level of palpability of this iconic and much maligned military food item," he said.

The Salem High kitchen became a vibrant, fast-paced area during the contest, with time being called out to warn students of how long they had remaining to complete their dishes.

Student "hosts" taking part in the live streaming broadcast also stopped by each work station along with camera crews to interview students as they prepared meals.

"They did a dry run weeks ago," he said, adding the event gives students a chance to work as a team, develop skills and do problem solving in short periods of time.

Dodge said it's also an opportunity to hone work-ready skills for the future.

"We work very closely with business and industry," he said.

Over at Pinkerton Academy's work station, a menu of plantain ratatouille was the plan. Student chefs Austin Spanks, Lily Mendes, and Matthew Wolcott each had a job, from carefully slicing the plantains to stirring a sauce for the ratatouille, a French-styled type of stew.

"Hopefully, it comes out good," Spanks said. "I think it will."

Guest host for the afternoon, Douglas Phillips, a former Food Network Holiday Baking Championship winner, said a fast-paced challenge like this required a lot of organization, especially when under time constraints.

"And they definitely would want to add some spice," he said.

As time started to dwindle, culinary teams put finishing touches on their plates. Salem High School student Marissa Merrill watched as her fellow chefs wiped some extra spots of sauce off the white plate to present a more pristine offering to the judges.

"I think we did pretty good with our time," she said.

Each student team then took a turn walking their plates out for judges to taste.

After careful tasting of each team's dishes, judges picked Pinkerton Academy as the big winner of the day.

Lily and her Pinkerton teammates said it was a collective team effort. Lily added her team only practiced for the competition once earlier that day.

"I think it was the skill and the cutting of the plantains the way we did," she said.

Edelblut then presented the Pinkerton team with the first ever Granite Skillet honor, saying he was proud to see student chefs engage the way they did and that this type of event will help create bright futures.