History of the State Board of Education

A century of citizen leadership for New Hampshire schools

The Legislature created the State Board of Education by statute in the spring of 1919, with the new board taking over "the business now performed by the superintendent of public instruction, the trustees of the state normal schools, and the state board of vocational education" on September 1, 2019. The Board was given authority over "Management and supervision of all public schools" in New Hampshire. 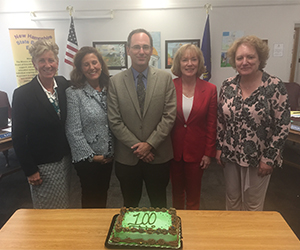 "SECTION 1: A board to be designated as the state board of education, consisting of five members, in addition to the governor as member ex officio, is hereby created. The member not more than three of whom shall belong to the same political party, shall not be technical educators or professionally engaged in school work, but public spirited and interested citizens willing to serve the state without pay and to give the time necessary for an understanding of the education needs of the state, and of the best way to supply them." – Chapter Law 106, 1919

The Legislature has amended the duties and composition of the State Board over the last century, but the premise of a group of dedicated volunteers from outside the education profession overseeing public schools remains.

In September 2019, current members marked the 100th Anniversary of the State Board of Education.

"For the past 100 years, New Hampshire has remained committed to the principle that public education must be overseen by the people themselves. In the words of a legislator at the time, the State Board of Education was to be 'a more representative expression of the people'", said State Board Chairman Andrew Cline. "That bipartisan, democratic principle has served New Hampshire well and will continue to guide our work as the board enters its second century."